The protocol for Sprains and Strains:

Sprains and strains are fundamentally the same, but slightly different in that they affect different anatomical structures. Let’s define both:

Sprain: An injury to a ligament, which connects bone to bone. Sprains in the ligaments of the ankle are common, as well as the knees.

Strain: An injury to a tendon, which connects bone to muscle.  Common strains would be in the tendons of the lower back and hamstrings. 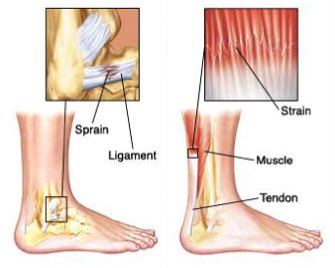 Ligaments and tendons have notable differences in form and flexibility, but for all intents and purposes, sprains and strains are treated the same because both of them have to do with an injury to some form of fibrous connective tissue.

The following video is a good introduction to the subject:

Any orthopedic injury is going to have some degree of inflammation, which will cause swelling, tenderness, erythema (redness), and decreased range of motion.  Ecchymosis or “bruising” is very common as well, although you may not notice it until hours or days following the injury.

1. “RICE” (Rest, Ice, Compression, Elevation)
The RICE method is a classic.  The four elements within RICE are designed to help facilitate venous/lymphatic drainage and minimize swelling.  Although it’s generally accepted that it does indeed achieve these outcomes, it’s not clear whether or not this is actually an effective treatment that leads to better recovery for the patient.  Evidence is based largely on low-quality clinical trials and laboratory studies with uninjured participants or animal models.  Regardless, it’s not harmful and it’s still universally accepted as a decent treatment.

2. Orthosis/splint/crutches for pain relief and stability
“Orthosis” refers to any method of splinting/bracing the limb or spine.  The amount of splinting is going to depend based on the severity of the injury, but for the most part, elastic bandages or braces within a boot/show is enough for the majority of ankle sprains.  If short on commercial braces, you can add support through tape.  The video below demonstrates a good wrapping technique:

3. Treat per Pain Management protocol
Tylenol and NSAIDS (ex. Ibuprofen, Meloxicam, and Naproxen) are usually the go-to for these types of injury.  With NSAIDs being anti-inflammatory agents, they should be prioritized for the patient before Tylenol.

For strains and sprains, we should always be advocating for “active rest“, which encourages mobility when tolerated.  This will help strengthen the affected part and reduce recovery time.  This video shows some nice range of motion exercises that the patient can do themselves:

And of course, if there’s no improvement after a week then we would suspect an “occult” fracture, which means “hidden”.

You got this!  Shouldn’t need any evacuation unless you find a deformity or signs of a possible fracture. Most sprains will recover within 6 weeks at the most. For severe sprains, it may take several months to fully recover, but no further management is needed outside of physical therapy.