This is the protocol for Deep Vein Thrombosis (DVT):

A deep vein thrombosis (DVT) is a clot that typically grows in the large veins of the legs and/or pelvis.  DVT’s occur in about 1 in 1000 people in high-income countries and it’s most frequently a disease of older age.  Although it’s not inherently dangerous, it can lead to a pulmonary embolism (PE), which can have a mortality rate of up to 30% 😳

The overall concept is easy, but the big question I always asked myself was how does a clot build up in a vein in the first place?  Is it cholesterol?

Arteries push blood through a high-pressure system, which actually encourages the formation of cholesterol plaques along the inner lining of the vessels.  Veins, however, are low-pressure systems.  Cholesterol doesn’t easily build up in these vessels the same way.  Clot formation in veins functions a bit differently.  As it turns out, it’s not cholesterol we are worried about… it’s the clotting factors in our own blood.

Together, these makeup Virchow’s Triad 🔱

Venous Stasis: Whenever blood halts or moves slowly, clotting factors will mesh. That’s why when you put pressure on a wound to slow the bleeding, a clot will form and the bleeding will stop. If an injury occurs inside an active vein, clots will form in the same manner. Venous blood is propelled through vessels primarily via skeletal muscle contractions.  If you’re actively walking or engaging your leg muscles, then your blood will flow quickly.  However, if you go long sedentary periods without moving your legs (ex. bed rest, air travel, etc.), then venous stasis will occur.  That’s why airline pilots will often tell their passengers to periodically get up and walk around during long flights ✈️

Endothelial Injury: When any blood vessel is damaged, a number of platelets, fibrin, and clotting factors are rushed to the site of the injury. While this is beneficial in a hemorrhagic shock scenario, it’s not helpful to have an overly robust clotting response to inner venous injuries 😐 Traumatic injuries and recent surgeries can both cause these endothelial injuries and promote thrombus formation.

When getting your SAMPLE HX from a patient w/ “leg pain”, ask questions that might connect their answers to some portion of Virchow’s Triad. For example:

When looking for signs and symptoms, look for a hot, painful, swollen calf  Although it can also occur in the thigh or pelvis, the calf is the most commonplace for first time PE’s, particularly in the posterior tibial or peroneal veins.  The affected vein may also become thickened or irritated enough to become palpable.  When comparing one leg to the other, this is what you may find: 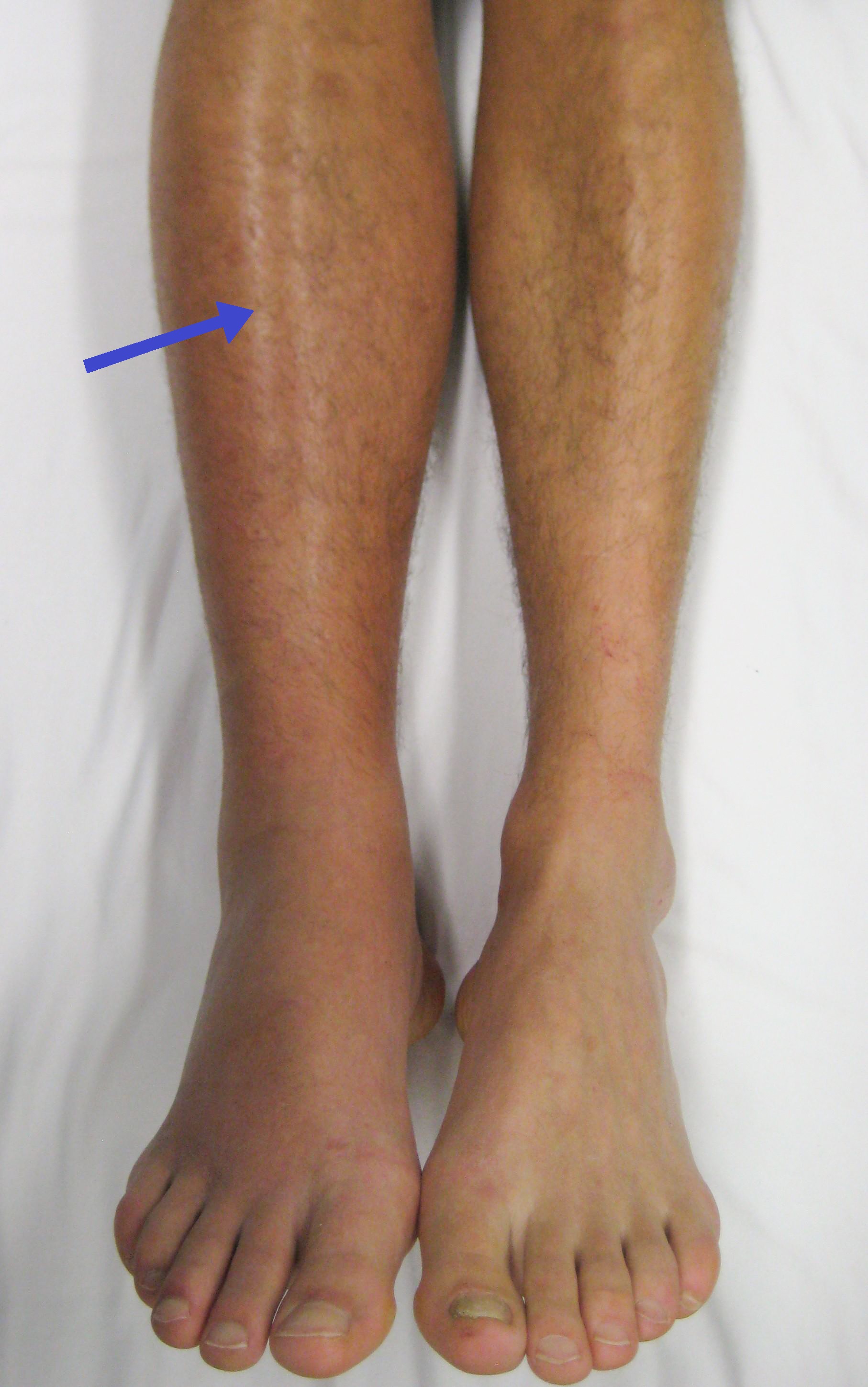 Can you tell the difference? If you can’t, there’s one more test you can do.  It’s called the Homan’s Test.  It involves looking for pain following the dorsiflexion of the patient’s foot. It’s not the greatest test in the world due to poor sensitivity/specificity, but it may have some diagnostic value if you don’t have an ultrasound or D-dimer tests on hand 🤷🏻‍♂️.  This is how you do it:

DVT’s come in all shapes and sizes.  Some of them are small enough to resolve on their own while others are so large that they need to be surgically removed.  Some people have reoccurring DVT’s and need to be on anticoagulant medications like Warfarin or Heparin.

Our treatment scope, however, is fairly limited.  The only medication that we can really give is Acetylsalicylic acid (Aspirin).  Although it won’t really be able to break down the thrombus, it will be able to ensure that there isn’t any further platelet aggregation response.  In other words, it’ll help keep it from getting worse 👍

Immobilizing the extremity may be helpful until more definitive treatment is available. By restricting movement, we’re reducing the chance that the clot will break off and travel into the lungs, causing something much much worse….a pulmonary embolism (PE).  PE’s can often be subtle, so Sp02 monitoring and looking for any new onset of chest pain or respiratory distress will help determine whether or not we need to transition into the Chest Pain protocol.  Even though the chest pain protocol is technically looking more for myocardial infarctions (heart attacks), the pre-hospital treatment for pulmonary embolism is roughly the same.

Remember, DVT’s are harmless until they become PE’s ☝.  A Priority evacuation is sufficient for an isolated DVT, but you’ll be putting yourself in a dangerous situation if you’re not continuously monitoring for signs/symptoms of a PE.  PE patients will need much more than what you have in your aid station and time will be of the essence! ⏱

Follow me
Brandon Simpson
I'm a 68W for the NCNG, a paramedic on the civilian side, and now a PA-Student at Duke University (Class of 2022). Devoted to learning and sharing of evidence-based medicine.

Follow me
Latest posts by Brandon Simpson (see all)